I have lost loved ones before, but this, this was so very different.   It was not natural.  It was “contrived” and “forced”.   I was sure I was in some sort of shock, because I just still could not wrap my head around what had happened over the past week and the past three months.  But one thing I knew was that my Momma was gone and I missed her more than I could have ever imagined possible.

The evening after her funeral, with several people including some close relatives who I love dearly at my house, I told Bradley that I needed to get out of there…I am not sure if I was just anxious or if I was having a full-on panic attack, but I did know for sure that I needed to get away!!   So Brad politely excused us and told everyone we would be back soon.   We hopped in the jeep, without the top on it, and took off to ANYWHERE but where we were.   Having to drive by and look out our windows and see the house where my Momma once lived, that was now occupied by my father and various relatives of his, depending upon the day, was going to be harder to take that I had envisioned.

It is was close to nightfall and we were just driving around in the country, feeling the wind in my hair, and looking at the scenery from the country that I grew up in.   We stopped the jeep in a spot that was overlooking some of the land owned by my father and talked.   Brad asked if we needed to just put our house on the market and move elsewhere?  And while it sounded tempting, me, being the stubborn person I am, said “No way!  I am not going to be bullied out of our home that we love by my father!”  I reminded him how we had just remodeled it the fall before, adding our big family room, with a wood-burning stone fireplace, a big new deck connecting the house to the pool and plenty of space for our kids, grandkids, neices, nephews, and other family and friends we wanted to have around, and our bulldog and boxer crew!  He said “Okay, but if you change your mind, I am ready to go…It’s just a house.  We can make a home anywhere.”

The sun was setting, so we decided we had better go.  As we were headed back to our house, we came around a corner and there, in a small tree with limbs overhanging the road, was a big, beautiful owl!   Definitely NOT something you would typically see, especially considering it wasn’t even really dark yet?!   I knew right then it was a sign from Momma…I felt sure of it, but I wasn’t sure what the message was supposed to be??  In case you missed this detail in one of my earlier blogs, my Momma LOVED owls and had for many years.   She had some pictures and figurines when I was a kid, but my father had since made her take them down and told her they looked stupid in their house.   After she moved in with our family, she had picked out some owls as decorations for her “new” room and was thrilled to have them!  I just couldn’t feel seeing this owl tonight was a coincidence.

We returned home and went to bed, but I couldn’t get the image of that owl or Momma off my mind.  Brad asked what I needed to make me feel better and I told him “the beach”.  You see, we had a trip planned a few weeks earlier in one of our timeshare resorts, but had cancelled it due Momma’s illness.  He said that we should just go…I told him, I didn’t think it would be possible because we had cancelled at the last minute.  And I reminded him that it was summer vacation season, so everything was likely booked.   He encouraged me to try calling our timeshare company the next morning anyway to see if there was anything available…even if  it was only for 3 or 4 nights.   I dreamt of my Momma that night….which really made me determined to try to find us a place.

I called our timeshare company early the next morning to see if they had anything available on a beach…any beach??  And as I figured, they did not.  But I couldn’t give up…I thought of our other favorite beach, which wasn’t a part of our timeshare company.   We love the beaches in Alabama, so I called our favorite resort, Sea Chase, in Orange Beach (which is not part of our timeshare company).  And, to my dismay, but as expected, they were also booked solid and didn’t have anything available.  I was getting ready to hang up when the customer service rep asked if I would like for her to check their Sister Resort, St. Martinique in Fort Morgan, which was about 20 minutes from Orange Beach?!   Sister Resort??   I didn’t even know there was one, but yes, please!  She took my number and told me she would call me back.  I was sure they were probably sold out too…It was mid-July.   My phone rang a few minutes later and it was the customer service rep.   She said “Well, you are not going to believe this, but it just so happens that they have one four-bedroom house available starting tomorrow (Thursday) and checking out Monday morning.   Do you want it?  Did I??   “Yes!!  Absolutely, I definitely want it!”  And so, it was booked!   I called Brad and Alex who were catching up on their mowing.  They said they would be home later to pack and we would leave around midnight!   I called my daughter and invited her and her family.  And my niece, Gracie.  And Alex invited his friend, Sam….Afterall, we had plenty of room!

I had already made a decision that one of the things I wanted to do when we were at the beach was for Bradley and me to renew our wedding vows.   After getting through the past three months together and the love and protection Brad had shown my Momma and my younger brother and his family, I felt a renewed closeness.   So I called our good friend, Troy, who lives in Orange Beach and asked if he knew anyone who could do our vow renewal there.   And, of course, he did!   And he would contact them and try to set something up.   And he and his family would be there to be part of our celebration.   Perfect.

I let my family who was staying with us know that we were just going to get away for a few days, but that they were welcome to stay at the house with my brother and his kids, who were also staying there.  They were, of course, beyond understanding.   So I packed some bags in record time (This was a big deal…for anyone who knows me).  And I told Brad when he got home that I still wanted to renew our vows and had made arrangements through our friend.  So we left earlier than planned that evening so we could shop for a new, special ring on our way out of state.  This wasn’t necessary, of course, but he insisted.

We drove all night and arrived at Fort Morgan mid-morning on Thursday.   We were able to check in early.  The house was fantastic!  And huge?!  It was in a resort neighborhood very close to the ocean.  We had a golf cart to drive to seaside..It was perfect!   The people I loved most were there with me.  And our friend, Troy, came to visit us…And to tell us he had set up our vow renewal for Saturday.  We spent the rest of that day and the next at the beach.  It was the perfect place to relax and unwind and just “be”.   It has always been the place where I feel “at peace”, which I never really understood, but it now makes sense (which I will blog about later when I get back to the DNA tests and such).

And while I was still overwhelmed by sadness, it was peaceful.  The beautiful sight of the endless ocean, the sound of the waves rolling in, the warm sun on my skin, the sand between my toes, the smell and feel of the salty air, and helping my grandsons build a sandcastle…All of it.  It helped me get some perspective and regain my composure.

So, as you would imagine, I wrote my own vows and mostly thanked Brad for not only taking care of me and Alex, but also my brother and his kids, and mostly for loving and being so very protective of Momma.  The love and support he had shown reminded me of how much he loved me and how very much I loved him.   I had two of the most handsome escorts ever…my two older grandsons.  And an adorable ring bearer, the smallest grandson.  And two beautiful bridesmaids, my daughter and my neice, Gracie, and two great groomsmen, my son Alex and my son-in-law.  And a very familiar groom.  And our friends, Troy, Natalie, and Johnathon, were there to witness and share the moment with us.   And Alex’s friend, Sam, acted as photographer.   It was small and intimate and beautiful.   We were so afraid it was going to be a washout because it rained a lot that day up until about 20 minutes before we  were scheduled to start.  And then the rain stopped.  And it was gorgeous.  And emotional, but so heartfelt. 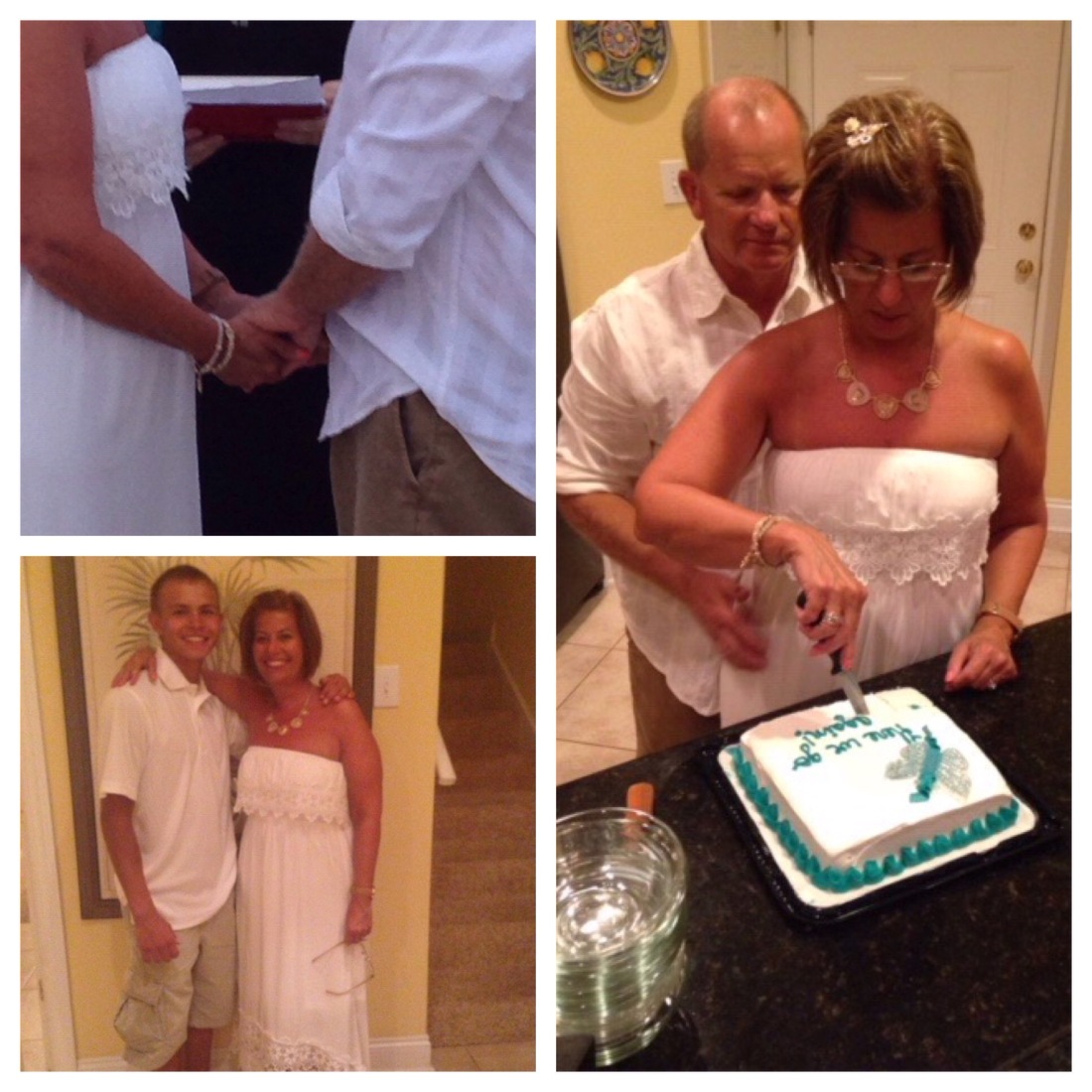 We had another day to play and enjoy the sun and the ocean.  And go to dinner with our friends.  And I got to be with the people that I loved the most.   We made new memories and shared old memories, especially those involving Momma.  And we smiled, and laughed, and cried, and cursed, and there were lots of hugs and a fair amount of kisses.  It was just what we all needed.

And it was…definitely the beginning of grieving and trying to start healing and get on with the life we had been given.  There was no doubt whatsoever this would be what Momma would want…She always wanted everyone else to be happy.   THAT was what brought her the most joy.   And at that time, that was a way to to pay tribute to her and her life.   But I knew in my heart that my life would never be the same….However, I had absolutely no idea of the twists and turns it would take.

View all posts by foundlingjourney

7 thoughts on “So Many Emotions”